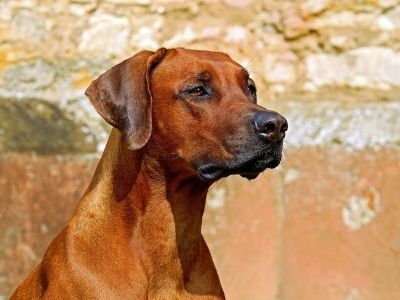 Stemming from Zimbabwe (formerly Rhodesia), the Rhodesian Ridgeback is a large, noble breed of dog originally bred to protect livestock from predators. Let’s learn more about this distinctive guardian.

Derived From The Khoikhoi
1. These powerful and athletic dogs are the result of crossbreeding the native ridged Khoikhoi dog and dogs brought to Africa by European settlers, including Mastiffs, Bloodhounds, Great Danes, and Greyhounds.

Dog v. Lion?
2. Contrary to popular belief, Ridgebacks have never been used to kill lions. However, they were used as part of the hunt, to track, corral and harass the lion before the hunter delivers the decisive act.

Fifty Shades Of Wheat
3. There is only one official colour for Rhodesian Ridgebacks - ‘wheaten’. However, this literally means the range of colours that wheat goes through as it grows and matures - pale flax to burnished red – so there can be a visual difference. 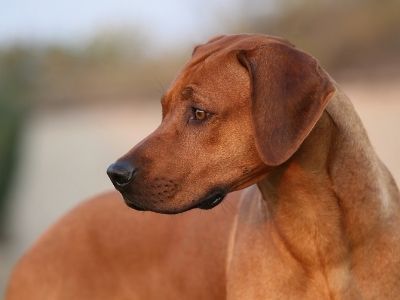 Man's Best Friend
4. Ridgebacks are extremely loyal and devoted to those they see as family – one reason they are often used as guard dogs.

A Bark With Purpose
5. Another aspect that makes them excellent guardians is that they don’t tend to bark unnecessarily, only when they sense danger and want to give off a warning.

Nom Nom Nom
6. If you’ve always been led to believe that Labradors are greedy dogs, then you should take a look at the Rhodesian Ridgeback – they love their food!

Punk Dogs
7. Their distinctive mohican is created by two crowns of fur immediately behind the shoulders and tapers down to the hips, growing in the opposite direction of the rest of its fur.