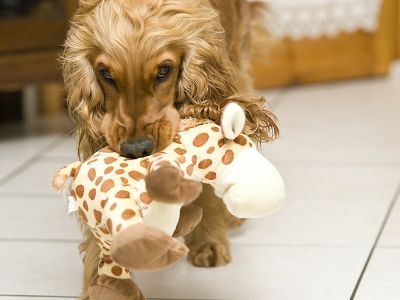 I actually planned to write this article about activities and games that you can play with your dogs indoors a good while ago, but never quite got round to it. A global pandemic and nationwide lockdown seems like a useful time…

Whilst you may not be able to get outside to exercise your dog sufficiently during this period, there’s lots that you can do inside, and you’ll be surprised how much mentally taxing games will tire your dog out.

The treasure could be a favourite toy or a tasty treat, such as a Salmon Cruncher, and you can be as adventurous as you like. Show your dog what you’re going to hide and then pop it somewhere that he can’t see. Encourage him to find it, helping when necessary with gestures or commands. If your dog hasn’t played the game before or isn’t very enthusiastic, make it easier for him.

You can also simply hide yourself! Pick a place where your dog can’t see you but would be able to hear you call and can access where you are. Call your dog – if she gets agitated or stressed as she doesn’t understand or can’t find you, make it easier and slowly build the difficulty from there. Remember, the key is fun. Reward her with a favourite toy, a treat or lots of excited praise when she finds you. This is also a handy way of reinforcing the recall command in a fun and safe environment. 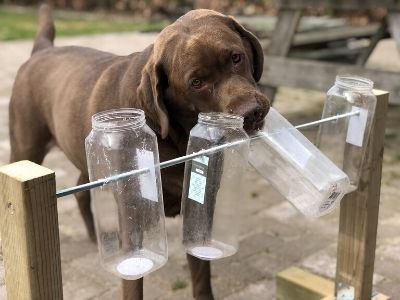 Use objects you have lying around the house to create mini challenges; whether it’s a box to jump over, a table to crawl under, a blanket tunnel to go through or objects to slalom round. Alter the aspects regularly to keep your dog interested.

4. Piggy in the Middle

You’ll need at least two humans for this game – multiple dogs ramps this up another excitement level too! You will both need some treats or a toy each, such as a ball or a tug toy. One person calls the dog, rewarding with lots of praise and fun. Then the next person calls her. Move further away from each other into different rooms and even different levels of the house – so long as your dog/s can still hear you both. This is a high energy, high fun game!

Let your dog be your magician’s assistant! Grab yourself a couple of opaque cups, glasses or bowls and some treats. Set your dog up sitting opposite you and let him watch you place a treat under one of the cups. Then invite him to come and choose a cup. When he gets it right, allow him to eat the treat. When he gets it wrong, show him the treat under the other cup but don’t let him have it. If this gets too easy, crank it up a level by increasing the number of cups or by moving the cups about and switching their positions once the treat has been placed underneath. This might seem super easy to you, but it’s a complicated thought process for a dog. Freshly Prepared Poultry Treats are great for this! 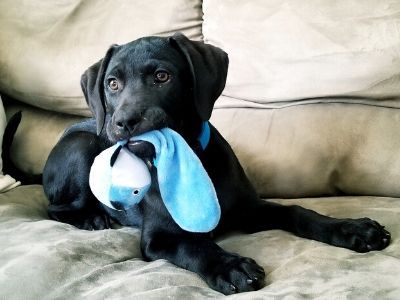 If your dog is lucky enough to have lots of toys lying around the house, teach her to tidy up after herself. It can either be a glorified game of fetch, asking her to retrieve each one to you in turn, as you then pop them into the toy basket, or you can teach her to do it all herself by training the ‘drop’ command. Once trained, just give the command when she is over the basket – with practice, she’ll be able to do it without the extra command; simply tell her to ‘tidy up’ and off she goes!

I’ve seen some great examples of this on Facebook recently! A friend’s daughter taught her dog to play noughts and crosses with her by setting out the grid then placing a treat on each of the nine sections. Her dog was invited to take one treat, and she then marked that section for her dog, before removing a treat to one side and making her mark. This continued until, amazingly, the dog won!

I also watched a group of Westies compete in a treat-eating race. A line of treats was set out for each dog and then they were ‘released’ to eat their way to the end. The winning dog then went back to ‘help’ the other dogs with their lines, of course!

What games could you adapt to include your dog?

Related Articles:
Children Brought Up Around Pets Are Less Prone to Allergies And Obesity
Puppy Training - Why 'Sit and Stay' Isn't A Thing
The Best Commands To Teach Your Dog