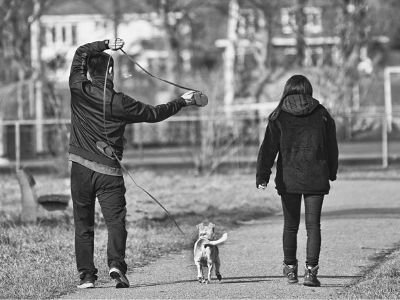 I have not been a fan of retractable dog leads since I was young and suffered friction burns when walking a family member’s dogs on such leads. Granted, I was young, and foolish to think that grabbing a thin wire lead to try and stop a dog running at full pelt was a good idea, but there are many things that can go devastatingly wrong when using retractable dog leads.

Let’s start with the dangers to you as the dog walker…
There has been a recent article in the BBC News regarding a woman in Cornwall who suffered horrific hand injuries, resulting in the amputation of part of her middle finger plus skin grafts, due to a retractable lead getting wrapped around her fingers when one of her retrievers ran off excitedly. Surgeons are warning that thousands of people could be at risk of lacerations, burns and/or ligament injuries due to the misuse of these leads. In Cornwall alone, there were 30 serious hand injuries caused by retractable dog leads last year.

Dangers to your dog on the retractable lead…
Clearly, if you are allowing your dog the full extension of the lead at all times, then he can quickly get himself into trouble that you are not going to be able to prevent; such as wandering into the road, getting too close to other, potentially aggressive or defensive dogs or any other dangerous environments when out and about. If you are using a standard lead, you are much more capable of keeping your dog under control, and also able to quickly return your dog to safety should the need suddenly arise.

If you are walking a larger, powerful dog and she takes off suddenly, there is a chance that some poorer quality or older lead cables may break; thereby leaving you with a loose dog in all sorts of potential trouble. If the lead doesn’t actually break, the wrenching force could still whip the handle out of your hand. If you have used a retractable lead yourself, you will know that they are usually a thin, lightweight lead with a sizeable, plastic handle to house the reel of lead. Your dog is now loose and trailing a long lead with a plastic ‘box’ bouncing after it. If your dog gets spooked by this, she is going to keep running to get away from it, but the object of her distress is going to continue to ‘chase’ her at the other end of the lead. Again, resulting in a very dangerous, distressing situation for all involved.

Many people use these leads as a way to stop their dog from pulling when out on a walk. However, a retractable dog lead is the last thing you want to be using in this situation; it teaches your dog to pull. When they pull, they are ‘rewarded’ by the lead extending and they can venture further. 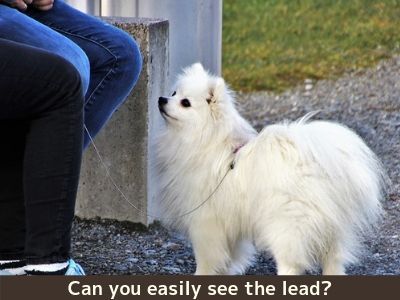 Dangers to other dogs and the general public…
Have you heard of the word ‘garrotted’? It’s not pleasant… Now, imagine that your dog is casually walking on a beach, for example, using the full extension of his retractable lead. All of a sudden, an excitable dog having a ‘mad five minutes’ comes racing past. As far as this dog is aware, you are stood in one position and your dog is stood approximately five metres away. He goes to run in between you, through the ‘open space.' He might not see the thin wire or tape of the retractable lead. It doesn’t end well… It has been known to happen.

Equally, if a fellow walker or cyclist unwittingly crosses paths with this thin cord/tape, whether through their own ignorance or your dog’s movements, the result could be disastrous.

How To Use Retractable Dog Leads (If You Wish)