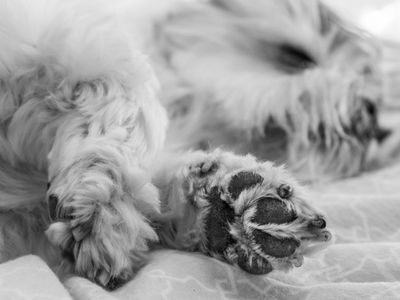 With fatty tissue to protect them from the cold and sweat glands to help them cool in the summer, your dog's paws really are sensational - in every sense of the word! Let's examine their super powers...

Dog Paw Anatomy
Your dog's paw is made up of five key areas:

Below is an example of a dog's front paw. 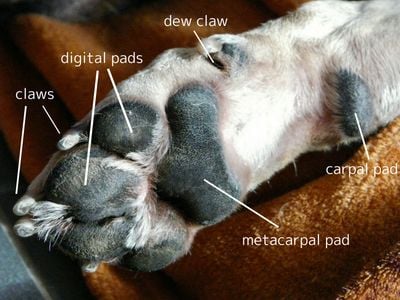 Some dogs can be born with extra dew claws (more than one per leg) or digits, these are known as polydactyl dogs.

Despite this standard paw anatomy, there are some breeds that have certain traits to help them excel in their field, so to speak. Akitas and doberman pinschers have compact paws caused by a shortened third digit; these are usually referred to as 'cat feet', due to the similarities to the feline paw. This increases their endurance as they require less energy to lift their rounder paws. Greyhounds and bedlington terriers, on the other hand, have what are known as 'hare feet', caused by a lengthening of the middle two digits. This gives them a greater speed advantage over other breeds.

The award for the longest digits in the canine world goes to the Newfoundland. This breed, along with Labrador retrievers, for example, has webbed feet, making them fantastic swimmers. 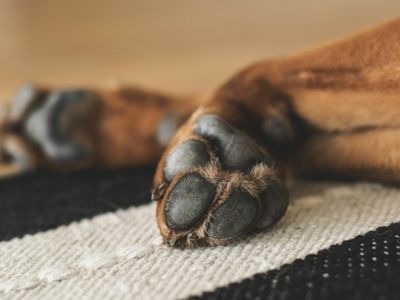 Loosely speaking, the digital pads are used to impart force as your dog accelerates, whilst the metacarpal and metatarsal pads aid with braking, and turning.

Your dog's paws can be prone to damage, usually from walking on rough ground or cutting the pads on something sharp. You can help to toughen your dog's pads by walking him regularly on harder ground such as pavements or gravel paths. Conversely, by letting your dog swim frequently, this can contribute to softer pads and a higher risk of injury or sensitivity.

Related Articles:
Understanding Your Dog: His Extraordinary Nose
Why Dogs Shouldn't Play Fetch With Sticks
Canine First Aid: What To Have In Your Kit