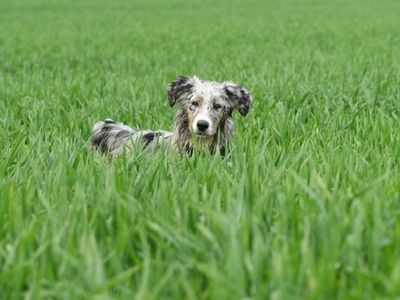 There are a couple of commonly-held beliefs in relation to the question of why dogs eat grass. Some people believe that they do it because they have an upset stomach and that the grass will help encourage them to be sick, whilst others are sure that they eat grass to make up for a nutritional deficiency in their diet. But are either of these suggestions correct?

Despite most people being convinced of their opinion one way or the other, there is actually very little research into the subject. A study carried out in 2007 by researchers from the VCA West Los Angeles Animal Hospital and the University of California did look at the topic though, and the results were very interesting.

After surveying 1571 dog owners, they found that 68% of their dogs ate vegetation on a daily or weekly basis, with the remainder grazing only once a month or less. 79% of the dogs predominantly ate grass as their preferred plant.

Only 9% of the dogs were reported as frequently appearing ill before eating plants, whilst only 22% were said to frequently vomit afterwards. 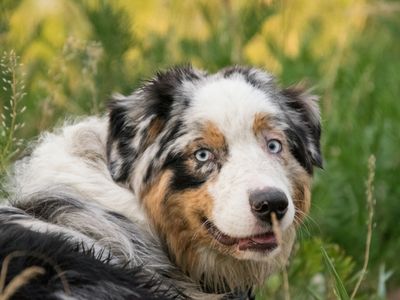 Interestingly, it was the younger dogs that tended to be:

There was found to be no link between sex, neutered/non-neutered, breed or main diet fed, with regard to the frequency or type of plant eaten.

The research concluded that their findings supported the view that eating plants is simply a normal behaviour of domesticated dogs.

My personal opinion is that dogs eat grass simply because dogs like the taste of grass. This is supported by my experience of my own dogs throughout my life, and the fact that they tend to eat only specific types of grass and mainly when the fresh, tastier shoots appear in spring. An occasional by-product of them eating this grass is that it irritates their stomach and they may therefore vomit.

To read the research article in full, click here.

Related Articles:
Why Dogs Shouldn't Play Fetch With Sticks
Canine First Aid: What To Have In Your Kit
You Can Stop Using That Silly Squeaky Voice With Your Adult Dogs. Now.