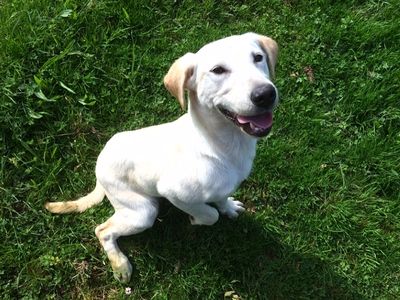 I had the thought today that some of you may enjoy reading about the progress of the two youngest reprobates here - Frodo and Eira. For those of you that follow the TP Feeds Facebook page, you are likely to be familiar with this brother and sister double act. Having been born last Christmas Eve, they joined me at the beginning of this year, at eight weeks old. Here is their story so far.

What most of you don't know is that Eira was never 'supposed' to be coming home with me. I went to see the litter with the intention of, hopefully, picking up a dog pup to have as a potential future stud dog and fresh bloodline. However, Eira was the last puppy, along with her brother, and only somebody with a heart of ice could have left the lovely, bouncy little bundle - well, that's what I say anyway! So, home I came with two new little mischief makers, much to the surprise of the rest of the pack - they'd only been forewarned about one addition. However, they soon accepted the new circumstances and the two settled into their new home, with their new playmates, very quickly. 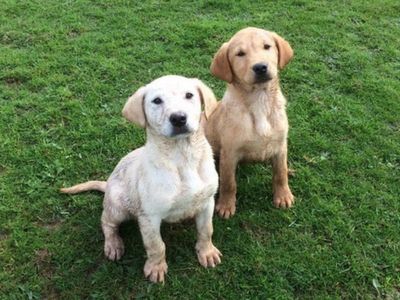 I don't tend to start training my pups until at least six months of age, (depending on their individual temperaments obviously), allowing them first to enjoy their puppy months. However, all dogs here at TP Feeds HQ are expected to be well-mannered. This includes waiting in the kennels whilst the door is opened and only coming out when given the go ahead, the same for gateways; they're also expected to sit waiting whilst their food bowl is put down and only to eat once they're given the cue word. Obviously, a good recall is vital but personally, I've never had an issue with this or needed to 'teach' it. Puppies should always want to be around you, you should be the centre of their little world. Of course, as they get older and start to test their boundaries, it occasionally needs to be reinforced to make sure they have a good, sharp recall rather than a 'I'll be there in a minute' kind of recall. As with everything, the earlier you establish these boundaries, the more hard-wired they become. 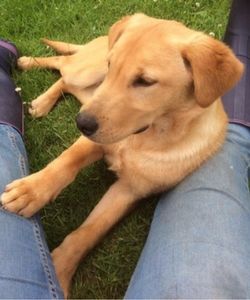 Now that Frodo and Eira are almost seven months old, I have started doing regular, short sessions with them - the emphasis being on learning through fun and for them to succeed at what I ask of them. With me being so busy with family life and work, it has actually helped in a way, as I haven't been able to get too keen and rush them unwittingly.

With living on the farm and not needing to use leads at all, the dogs here are older than usual before they are introduced to them. The inaugural outing on the lead is usually greeted with a spiralling dance of objection which soon settles into a begrudging acceptance. As with all training for the youngsters, it is only done in short bursts, and they are never put on the lead as a punishment so it doesn't become associated with any negativity. With these two, a couple of short periods of leadwork has led to a vast, and instant, improvement in their heelwork - perhaps they're hoping that if they heel nicely off the lead then I won't get the blasted thing out again! 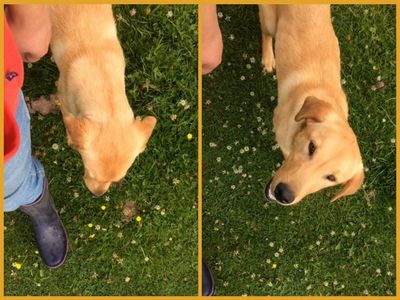 Retrieving practice is a given when it comes to Labradors and these two would retrieve all day if I let them! This is very helpful as it can be used as a reward when working on something that they're not too keen on. Despite the fact that the pups love to retrieve, one has to be careful not to overdo it as it is far easier to burn off a dog's enthusiasm than it is to instil it. I also don't introduce steadiness at this early age either. They are still happily bounding in. Occasionally, I will sit the pup up and then walk a few yards away before gently throwing the ball/puppy dummy a short distance. If they run in they are not reprimanded, and if they wait they are released to retrieve the article within a fairly short space of time. For information on why I do not use a large, adult dummy with youngsters, please read this previous blog. 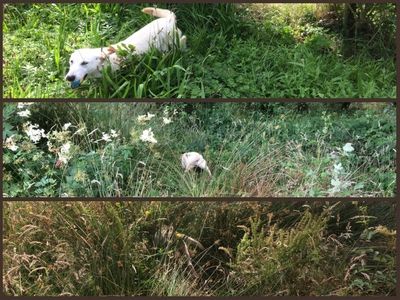 When doing these short retrieves, I like to introduce various levels of cover to the pups so that this does not come as a surprise when they are older and are routinely asked to enter and hunt cover. Luckily, these two are so focused on retrieving that it would seem no level of cover fazes them! This obviously needs to be approached with care, and you need to know the ground that you are asking the pup to cover. You don't want to be asking your young dog to go through dangerous ground or vegetation thick with nettles, as this could put them off retrieving altogether.

I would say that, at this stage, Eira is the keener hunter of the two. Frodo does need a little more encouragement to continue to hunt if he doesn't find the article on the first attempt or two, whereas Eira will hunt and hunt until she is successful. This obviously needs to be monitored closely, and help given if the pup is not hunting the right area or if you've accidentally thrown the dummy into an awkward place. You want the pup to succeed and you don't want them to be working for too hard for too long at this age. This is also a good time to introduce a hunt command when they are in the correct area of the dummy. They will not know what it means at first, but if you are consistent and correct with your marking, they will soon learn to associate that this command usually comes just before their 'reward' (the dummy), so they will understand to hunt harder when they hear that command.

Feel free to share your experiences with your pups in the comments below, and look out for the instalment of the Puppy Diary as the pups move on with their training.