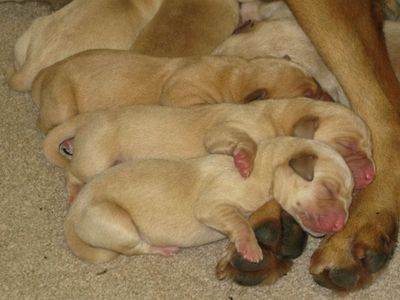 Have you heard the term ‘swimmer pup’ before? Or perhaps you’ve been unlucky enough to have one or more in a litter that you’ve bred. What decision did you make regarding that little pup’s future? Are you aware that many pups with swimmer puppy syndrome can actually be successfully rehabilitated with a little time and patience?

What does swimmer puppy syndrome look like?
It’s pretty much as you’d imagine it really; a puppy that is unable to stand or walk but is instead lying flat on its belly whilst ‘paddling’ his legs trying to gain purchase to stand up. The hind legs are usually the worst affected as the syndrome is caused by a weakness in the hind leg muscles, but due to persistent attempts at standing, the front legs will also tend to splay. Also, due to remaining flat on their stomachs for an extended period of time, swimmer pups tend to have flat chests.

When will I know if any of my puppies are suffering?
Puppies should be able to stand and walk by about three weeks of age so this is the point that most cases are detected, especially if other puppies in the litter are unaffected and now walking with confidence. However, if you know the warning signs you can pick up on the problem earlier, thereby increasing your chances of reversing the damage.

What causes swimmer puppy syndrome?
The syndrome is usually present (although not yet apparent) at birth, so it is believed that there is a hereditary element involved; however keeping puppies on smooth, slippery surfaces during their early weeks of trying to stand and walk can not only exacerbate the problem but, in some cases, actually cause swimmer puppy syndrome.

What can I do to help my puppy?
There are several measures that can be taken to prevent or fix the effects of swimmer puppy syndrome.

Firstly, ensure that your young pups are not being reared on a slippery surface; ideally, use carpet or vet bed so that they have plenty of traction and also strategically place items, such as rolled up towels/blankets, underneath the flooring to create small mounds that will help to support your puppy and give them more chance of getting up on their feet.

When picking up your puppy, be aware of its flattened chest and the pressure this puts on its respiratory system. Never pick up a swimmer pup with your hand under its chest.

Physical therapy is also a crucial tool for you to take advantage of. Take your pup, sit on a chair/the sofa and gently place the puppy on its back between your legs on your lap. Gently take its hind legs and circle them in a cycling motion, the same should be done for the front legs, especially if they have already started to splay. Massaging the chest area to encourage it to take on a rounded shape is also important and should be done every day, although once you have your puppy attempting to stand and walk more often, its chest will naturally become rounded as the pressure is taken off – obviously, the sooner you take action, the more likely this is to occur naturally. 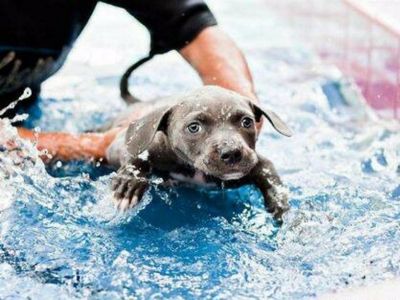 Swimming can also be very beneficial in developing muscle strength, provided the puppy does not become too distressed. Support your puppy at all times – the swim reflex doesn’t tend to take effect until around six weeks of age. Submerge the puppy up to its chin, this will encourage it to kick. Little and often is the key to this exercise and of course it goes without saying to use lukewarm water and to dry the pup thoroughly before returning to its mother and litter-mates.

It may initially sound slightly barbaric but by far and away the most successful way of rehabilitating swimmer pups is to tape their front legs together and, separately, their hind legs to each other, like two sets of handcuffs. Wrap the tape around one of its front legs, leave a short length, then wrap the tape around the other front leg – the legs should now be the natural distance apart and not able to splay outwards. The same should be done to the hind legs. This will really help you puppy when it attempts to stand and walk whilst wearing them as the tape takes the pressure and prevents the legs from splaying, encouraging the joints to develop correctly. Of course, keep an eye on your puppy whilst it is wearing these ‘handcuffs’ so that neither it nor its litter-mates can chew and then potentially swallow the tape. 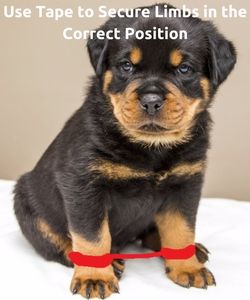 In my experience, swimmer puppies are not a lost cause and can be successfully rehabilitated with a little time, and will go on to be normal young dogs that you would never have known struggled in their first few weeks of life.

I should hope that it goes without saying that if you are worried about your puppy’s health or are not sure how to help your pup properly, consult your veterinary surgeon for help and advice.

Have you got a puppy or young dog? Check out TP Feeds All Life Stages Grain Free Beef with Superfood Mix to give your puppy the best start in life.

Related Articles:
Single Puppy Syndrome - Raising An 'Only Puppy'
Children Brought Up Around Pets Are Less Prone to Allergies and Obesity
The Big 3 In Joint Support
Canine Elbow Dysplasia: X-Raying May Not Be The Answer - Guest Vet Blog
Health Problems In French Bulldogs: The Worst Is Yet To Come
People Put More Thought Into Buying Shoes Than A Puppy