I was walking with the dogs across the farm a few days ago when I stopped to watch a red kite soaring above the two small ponds near the top of our land. I began to ponder how I, perhaps, take these majestic birds for granted; they are seen quite commonly in our part of the world but I am regularly surprised that people living just in other parts of Britain are not even able to recognise a red kite in flight, often mistaking them for a buzzard. I was reminded, not for the first time, how lucky I am to live the life that I do, but this encounter inspired me to collate a few facts for you regarding this remarkable bird of prey that we so nearly lost not even a century ago.

1. Wales was at the centre of ensuring the survival of the red kite in Britain – and what a success story it has been! Back in the 1930s there were only two breeding pairs known to exist in Britain; these were in mid Wales. With careful conservation efforts, this population has steadily increased and the red kite is now a fairly common sight in many parts of Wales with the current population estimated to be between 750 and 900 pairs (that’s just in Wales alone!).

2. The main distinguishing physical feature of the red kite is its distinctive, forked tail feathers. These are not only a beautiful sight but also serve as the equivalent of a boat rudder, helping the bird to manoeuvre through the air and take advantage of the prevailing winds and air thermals. 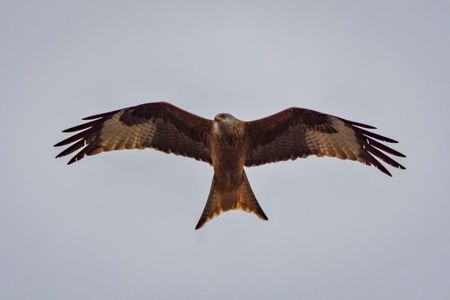 3. The red kite is primarily a scavenger and will feed off any carrion that it can find; however, it will also catch small mammals, birds and even worms, if the opportunity arises. In fact, when it comes to their food, the red kite is perfectly happy to thieve from others in order to fill its belly, often stripping larger raptors of their prey whilst in mid-air.

4. There are many references to the red kite in literature, even as far back as Shakespearean times. Shakespeare himself spoke of their thieving tendencies when it came to nest building by suggesting that only ‘lesser linen’ should be worn whilst the red kite builds. The red kite is renowned for using unusual, and often man-made, materials to build its nest and has indeed been known to steal clothes from washing lines!

5. They may be determined to lead lives of crime but at least red kites seem to be loyal when it comes to matters of the heart; they are generally monogamous and will usually mate for life.

6. Despite its impressive 160 cm wingspan, the red kite is surprisingly light-weight. During the spring, adults can weigh as little as 900 grams, considerably less than your average mallard.

7. As with many creatures, there are several old English names for the red kite, including ‘gled’ and ‘glead’; perhaps you have heard of, or even live in, Gledehill in Yorkshire or Gleadthorpe in Northamptonshire, these names are a nod to this striking bird of prey.

Related Articles:
Travelling By Car With Your Dog - The Law
Dog Bites: Warning Signs And How To Recognise Them