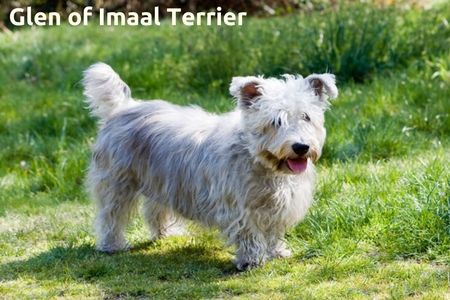 So you should already know that the African elephant, the giant panda and the polar bear are considered ‘vulnerable’ by the World Wildlife Fund, but did you know that there are numerous native breeds of dog from the British Isles that are also judged as vulnerable by the Kennel Club. Here we look at the twelve breeds that are seen as most at risk.

1. Skye Terrier
Originally bred for going to ground after rabbits, the Skye terrier is currently considered by the Kennel Club to be the most endangered native British breed, with only 28 pedigree puppies registered in 2016. This terrier is far more of a force to be reckoned with than you might think when looking at it – the Skye terrier is known for being fiercely loyal to its owners, has lightning fast reflexes and is thicker set and heavier than its delicate, long coat might have you believe.

2. Otterhound
Put simply, a boisterous scent-hound with a love of water. As the name suggests, these dogs were originally bred for hunting otter and were developed from the bloodhound (see number 4). One thing to be said about otterhounds - they like the sound of their own voice. As is the tradition with hounds, the otterhound does not ‘bark’, it ‘sings’ – loudly and enthusiastically!

3. Sussex Spaniel
As the name might suggest, these dogs were indeed founded in Sussex, England. This spaniel has, shall we say, a ‘distinctive look’ and can be quite a challenge to train due to his stubbornness although, once trained, he makes an effective member of the beating team. Only 49 puppies were registered with the Kennel Club in 2016, however the breed has actually come a long way already as there were a mere 7 in existence following World War II.

4. Bloodhound
Whilst there appears to be some contention on whether the bloodhound actually originates from France, or even Belgium, the Kennel Club has included the breed in their list of vulnerable native breeds, so who am I to question them... These large hounds were bred to follow boar and deer trails, and can now occasionally be seen working with the police as tracking dogs. Just don't stand too close when this gentle giant is having a shake - you're likely to be the ungrateful recipient of a 'slobber shower'.

5. Irish Red and White Setter
Initially employed by falconers due to their natural tendency to 'set' when they scent game, the Irish red and white setter is the original, and of course it follows that some might say, 'the best'. This breed appears to be the ultimate victim of fashion trends with the all-red variant gaining an over-riding popularity, despite the red and white being easier to spot in the field. Due to this initial decline and their subsequent revival, the Irish red and white setter is now considered as a separate breed to the Irish (red) setter.

6. Glen of Imaal Terrier
Originating from Ireland as tenacious badger hunters, these dogs live for the chase; so if you're a fan of cats or seeing squirrels in your garden, perhaps they're not the breed for you! Unusually for a terrier, the Glen of Imaal terrier is quite laid back and easygoing around the house; however, whilst they are generally sociable with humans, they are not too receptive to canine company. One incentive for the revival of this breed is that they may take the derogatory title of being greedy away from the labradors, as these little terriers have got an appetite far bigger than their bellies!

7. Field Spaniel
Somewhere in between a cocker and a springer in terms of size, this spaniel works in much the same way too. Traditionally, a field spaniel should be solid in colour; however due its sharp decline, the breed was outcrossed with the English springer spaniel which introduced variations of colour and eventually resulted in roans being permitted under the breed standard. There were just 80 of these water-loving spaniels registered with the Kennel Club last year.

8. Curly Coated Retriever
It has been said that the curly coated retriever is the oldest of the retriever breeds, although unfortunately, it would appear that with age comes unpopularity. A slow-maturing, playful breed, the curly coated retriever is a little more cautious towards strangers than other retriever breeds. They are traditionally used much in the same way as labradors and golden retrievers, although wildfowling is a particular strong point due to its dense coat.

9. King Charles Spaniel
The King Charles spaniel was originally intended to simply be called the 'toy spaniel', however King Edward VII wasn't too impressed with this and insisted that they remain 'royal' spaniels. As the domed skull and shorter muzzle gained popularity at the beginning of the 20th century, a group of determined breeders decided to maintain the 'old type', which eventually led to the breed being split into two breeds - the original plus the cavalier King Charles spaniel, which has proved the more popular in modern times.

10. Smooth Collie
A herding dog by nature, these smooth coated variants of the rough collie could actually be interbred with their long-haired cousins up until 1994 so a mixed litter would often be produced. Queen Victoria was a keen supporter of both the smooth and rough collies and even had a particular favourite, a smooth collie named Sharp.

11. Lancashire Heeler
Originally known as the Ormskirk heeler or the Ormskirk terrier, this breed is actually a result of crossing the Manchester terrier with the Welsh corgi, which is clearly evident in both its appearance and nature. An intelligent dog with a stubborn streak, the Lancashire heeler was, and still can be, used for various tasks; herding cattle from Wales to the markets in Ormskirk, moving livestock on the farm, and hunting rabbits and rats.

12. Dandie Dinmont Terrier
The only dog known to be officially named after a fictional character, the Dandie Dinmont terrier was originally bred to hunt badgers and otters. It is said that all Dandie Dinmont terriers living today are now descended from only one dog - a poacher's dog that was found in a trap on the Duke of Buccleuch's estate in 1839. As with most terriers, this breed are generally lively, independent and determined dogs and many have commented that they have a 'dignified' air about them.

Related Articles:
Health Problems In French Bulldogs: The Worst Is Yet To Come
Swimmer Puppy Syndrome - It's Not The End Of The Road
Is Rescuing Dogs From Abroad Doing More Harm Than Good?