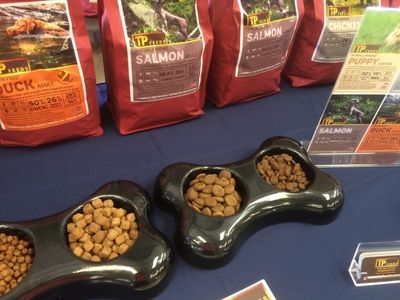 My second show of the season was in fact the first show for these particular organisers. The CHC Country Fair, held at Pontargothi (Cothibridge) Showground in Carmarthenshire on 17/18th June, was planned to fill the gap left by the Welsh Game Fair which is not making an appearance this year. In my humble opinion, it surpassed what the Welsh Game Fair had become in recent years.

The Saturday morning dawned warm and bright – and it was only going to get warmer and brighter. I arrived, with helpers in tow, at 7.30am to a cheery welcome, which soon turned to perplexed frowns as TP Feeds didn’t appear to be on the list! Having assured the lovely man on the gate that I wasn’t planning on crashing their event, I was allowed through and thankfully found my allotted space which had in fact been reserved for me – disaster averted! 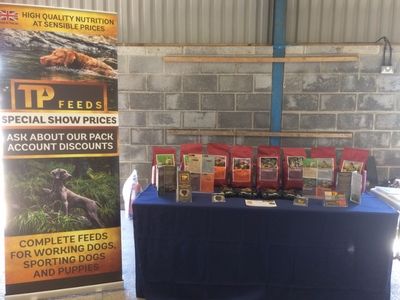 I was set up and raring to go by 9am – there must have been a queue at the entrance as members of the public were already starting to fill the showground! My fellow traders were in good spirits and I was particularly delighted to have been situated between the cake tables and the pie stand (Seasons Foods), and opposite the bar! I do seem to be placed near the cakes at pretty much every show that I’ve attended over the years, my reputation clearly precedes me…

The day went well with a healthy mixture of:
chatting to prospective new customers and their wonderful dogs who were thoroughly enjoying pausing at my stand to sniff, and sample, the delights spread atop the table;
selling bags, both small and large, to enthusiastic dog owners;
trying to keep cool in the humid heat of the day;
and attempting to keep my 18-month-old little boy confined to at least a 20-yard radius of my stand! (Believe it or not, this didn’t do anything to increase my chances of staying cool…) 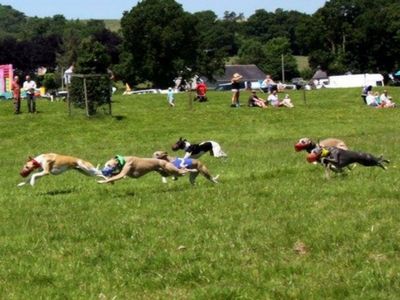 Five o’clock heralded the end of the day and, whilst children and young-at-heart/slightly tipsy adults risked their limbs and their dignity on the ‘It’s a Knock-Out’ course, I packed up the stand and headed home to the sweet relief of a cold shower and a hot pizza.

The following morning, after convincing my legs that they really do have to drag themselves out of bed, I arrived back at the showground which, along with many of the campers, looked slightly worse for wear following the previous night’s festivities. Luckily it wasn’t long before several sensible women who had opted for an early night helped us traders make the inside look presentable once again and a small army of, albeit slightly ‘zoned out’, organisers picked litter and prepared the showground for another swathe of visitors. 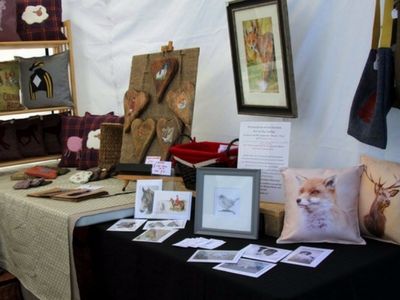 If the Saturday was hot, the Sunday was a scorcher! By eleven am I had sent my little boy home as the heat was simply unbearable for him – he’s a winter baby through and through. I would suggest that the weather did have an impact on visitor numbers, with many opting for the beach rather than the showground and several choosing to leave their four-legged family members at home but the classes were still fully subscribed and, as the saying goes, the show must go on! And on we went, albeit a little slower and perhaps with a couple more grumbles and sweaty brows that had been anticipated.

TP Feeds sponsored the winners of the Gundog Puppy Championship, the Adult Gundog Championship and the Family Dog Championship with a bag of dog food; everyone was enthralled by the coursing, the little ones had a go with their furry best friends in the Family Dog Show and then thoroughly enjoyed meeting the donkeys and going for a little ride in the Donkey Derby. 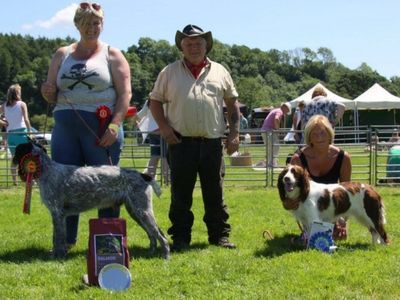 As the day, and the weekend as whole, drew to a close, I think everyone involved in the running of the show gave themselves a well-deserved pat on the back – or at least they ought to have done. I packed up my stand and, after a slight car-key-related mishap, eventually made my way off the showground and home to another well-earned cold shower. Trading was good, the company was excellent, and the ice cream from Mountainview Ice Cream and Milkshakes was outstanding. 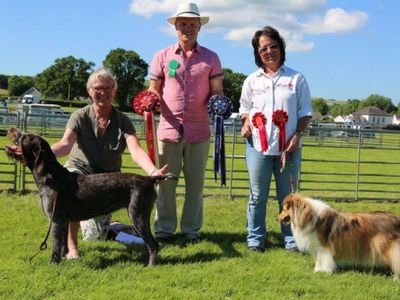 Of course, with it being the first CHC Country Fair, there were always going to be minor teething problems and areas that could be improved upon and expanded, but there is already a date set for next year so let’s hope that the second CHC Country Fair will be even bigger and better!

With thanks to Eleanor Joseph for permission to use a selection of her photographs.